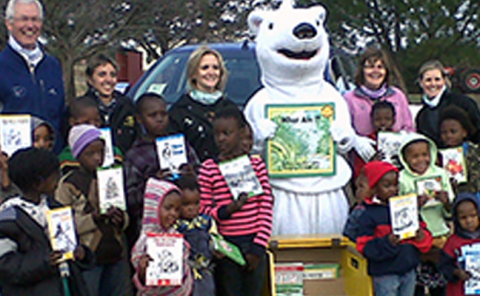 Carnarvon is an impoverished Karoo town with severe social problems such as a lack of jobs, alcoholism, absentee parents (because of the lack of work opportunities), and drop-out school children who become street children and/or gang members.

The computer equipment KISCH IP donated was in addition to approximately 20 computers that the Department of Science and Technology had already installed at the high school, equipped with dedicated software to assist learners with their science and mathematics courses and projects. Our donated computers, however, are for use in general computer training for the learners.

KISCH IP again donated and delivered 22 computers and 3 printers to Carnarvon High School (together with new screens, keyboards and mice) to replace and upgrade the computers and equipment.

Six of our first batch of computers are being used in a separate room by their teachers for lesson preparation.

We had additionally arranged that some of the first batch of computers from Carnarvon High School would be passed on to the farm school project which aims to assist the children of farmworkers in the Murraysburg district to become familiar with computers and to develop some basic computer skills using various children’s programs.

We are currently in discussions with the principal of Carnavon Primary School, regarding the possibility of the next batch of computers being passed on by the Carnavon High School to the Carnarvon Primary School. This approach would mean that learners starting at the high school would already have a basic knowledge of computers.

Things to consider when formulating a royalty rate
Advertising watchdog gets its teeth back
Russian trade mark wars – PEPPA PIG and others
The Metaverse, Non-Fungible Tokens and how to protect your brand within this digital phenomenon